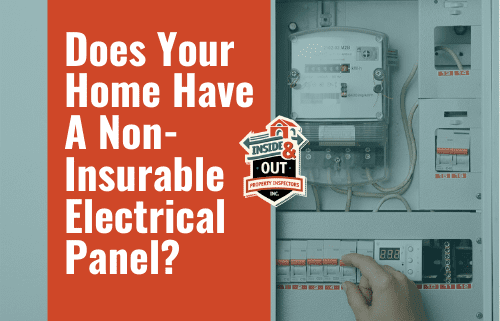 Whether you’re a current homeowner and you’re taking a look at your electrical systems, or you’re interested in buying a home, it’s a good idea to know about non-insurable electrical panels – and what they could mean for your home.

In this article, we’ll discuss the basics of non-insurable electrical panels, a few of the top brands that made them, and what you should do if you find one in your home.

Why Are Some Electrical Panels Non-Insurable?

Certain types of electrical panels are non-insurable because insurance companies have experienced a large number of claims related to electrical fires in homes that have these boxes.

In most cases, this is due to faulty manufacturing. Federal Pacific panels, for example, are a well-known type of non-insurable circuit panel. Though they may function for years, they eventually start to fail, and their breakers may no longer trip properly – causing a fire hazard. The circuit could be overloaded, and the breaker would never trigger. This could lead to a serious electrical fire.

Many homeowners are unaware they have one of these panels until they have a four-point inspection – and then their insurance company demands they replace it.

Wondering what types and brands of electrical panels are often non-insurable? Here is a quick list of some of the most common manufacturers and panels.

Get Your Home Checked For These Outdated, Dangerous Panels!

Want to join the discussion?
Feel free to contribute!